The Stabyhoun and its origin 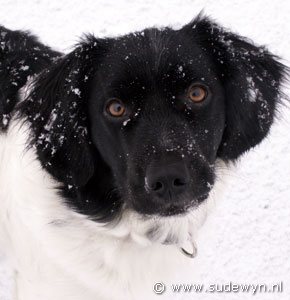 The Stabyhoun is one of 11 Dutch dog breeds. It originates from Friesland, a province in the northern part of the Netherlands (more specific, the Frisian Woods). It is said that the Stabyhoun is a descendant from the Spaniels brought North by the Spanish conquistadors. There are several resemblances with the Drentsche Patrijshond (Dutch Partridge dog) and the Large Münsterländer, both coming from adjoining regions. The three breeds are probably related to one another.

Because the Frisian Woods was a secluded area for a long time, the Frisian (or Friesian) Pointer had all opportunity to develop without much influence from other breeds. Above all else it was the dog of the common man, who utilised it as a polecat- and mole-catcher (moleskins provided a fair additional income in those days), vermin exterminator, draught dog and watchdog. In earlier days, one even hunted otters with it. Today, the Dutch Stabyhoun is still an appreciated all-round gundog and vermin exterminator.

The official breed name is Stabyhoun, pronounced as Sta-bay-hoon, with the emphasis on bay. It is assumed that the name 'Staby' is a combination of the words 'sta-me-bij' (meaning 'stand-by-me') which was exactly what the Staby did: assisting his owner in everyday life. The word 'houn' is simply Frisian for 'dog'; a stand-by-me-dog so to speak. In Friesland the Stabyhoun is primarily known as a Byke (variations in writing: Bijke or Beike), it is often named that way as well. In those parts, the first name has become the breed name. In 1942 the Stabyhoun was acknowledged by the FCI and classified under group 7, section 1.2: the continental pointing dogs. 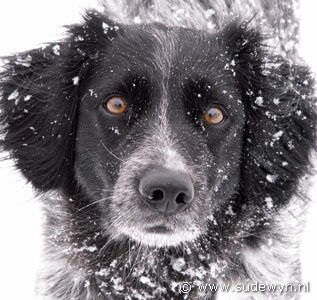 The Stabyhoun has a great character and is an excellent family dog, friendly towards children. However, it's no couch-potato. How active Staby's are indoors, depends on how active they are permitted to be outdoors. If you can provide a Staby with the physical and mental challenges he needs (and that is quite a lot!), he will be calm and pleasant indoors. If you can't, he'll get bored and start to entertain himself (at the expense of your furniture). A Staby has no trouble being left alone for a couple of hours, providing you taught him so in a good manner. It is not something that comes without any practice. People underestimate the time and effort it takes. Once a dog has experienced the anxiety of being left alone for too long, it will most likely get progressively worse. But that is the case with all dog breeds.

The Dutch Stabyhoun is inquisitive and undertaking by nature. He likes to make good use of his nose and won't hesitate to go and track small game independently. It's been bred to do so for decades, you do need to be aware of that and train him to get it under control! Better still: make use of it yourself, and train him as a gundog or scent dog... he will love you for it! I do get the impression that a Staby is sensitive to loud noises but that shouldn't be a problem if he's well socialised.

A Staby has watchdog-blood as well. Strangers will be announced loudly and treated with healthy suspicion, but aggressiveness is not in his vocabulary. Once he gets to know the caller, he'll be greeted with great enthusiasm on future visits. The Frisian pointer won't easily pick a fight with other dogs, but like all dog breeds, males can be dominant towards other males. This varies from individual to individual. An experienced breeder can tell if a puppy is prone to dominancy or not. Of course, the right (or wrong) upbringing can make a lot of difference. In general, females can be a bit timid and hold back towards strangers or in unfamiliar circumstances, but again; much depends on upbringing and socialization.

Stabyhoun are attentive, learn fast and a have a will to please. Positive training with lots of rewards works best for them. They don't do well on a harsh upbringing, it almost certainly makes a sensitive dog like the Frisian Staby freeze up and cause him to do nothing at all. You need to be clear on rules though and use them consequently because a Stabyhoun can be quite pigheaded at times. You can accomplish a lot by stimulating his inquisitiveness and his eagerness to learn and reward good behaviour enthusiastically. Try to be the boss you yourself would like to work for: honest, patient, kind, stern if needed but gentle whenever possible. Don't make him work for you, make him want to work for you!

By 'work' I mean anything that involves lots of physical and mental (inter)action for dog and owner; agility, fly-ball, tracking, obedience... virtually anything that makes the two of you work actively together.
Special attention is given to gundog training, as hunting is in a Staby's blood. You can't do him a greater favour than to give him the opportunity to develop his instincts and put them in service of his boss. My dogs love it when I take them out for a long walk but they really go berserk when I get my training gear! If you don't like working with (dead) game, using dummies is an excellent alternative. Go check out various dog schools near you to see if they give courses that suit you and your dog.

After a hard days work it's good to rest.

With the right upbringing, care and attention, and lots of time, a Stabyhoun will be a friend for life!